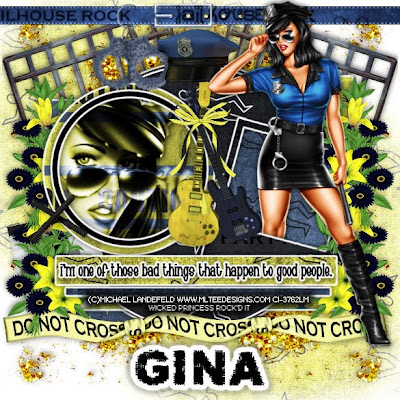 This tutorial was written on June 13, 2010 Shani aka Wicked Princess. The concept of the tag is mine and mine alone. Any resemblance to any other tag/tut is pure coincidence. This was written for those with working knowledge of PSP.

++Template 355 By Missy can be found HERE


++ Tube of choice or the one I used. I used the artwork of Michael Landfeld and you can purchase his work from HERE

Next open the metal jail doors, resize then copy and paste as a new layer. Move below to just above the glitter splat layers. Move towards the top and angle to the left. Duplicate it and go to image, mirror. Adjust as needed.

Now open the bouquet of flowers you like. Resize it then copy and paste as a new layer. Move to the left side of the tag, towards the top. Just below the circles and Polaroid layers. Duplicate it and move to the end of that one. Merge down one layer then duplicate, image mirror.

Now open your tube. Resize it then copy and paste as a new layer. Duplicate it then go to adjust, blur, guassian blur set at 3.00. Change the blend mode to overlay. Change the opacity down to about 75 or just a bit less. This is so it’s not as strong. Merge down one layer. Move the tube so that it’s sitting over the Polaroid frame. We’re going to make it look like she is stepping outside of the frame. Duplicate it then move it below the frame. Erase the bottom part of her leg on the left. You don’t want that part seen. Now on the top tube layer, also remove the part you don’t want seen. Erase it a bit above so that it looks like she is literally stepping outside of it.

I used the close up that came with the tube I purchased. But you can do this just as easily by resizing your tube and cropping. Open your tube, resize it then copy and paste where you like it. Move below the circle frame layer. Duplicate it then go to adjust, blur, guassian blur set to 3.00. Change the blend mode to overlay. Set the opacity to what you like on this layer like you did before. Then merge down one. Change the blend mode to luminance. Using your magic wand tool, click inside the circle frame layer. Go to selections, modify, expand by 4. Go to selections, invert. Then go to selections, none. You know hove a pretty cool effect with out having to use a plug in!

Then open the baton’s, resize then copy and paste as a new layer to the left of the circle frame layer.

Now open the do not cross ribbon, resize then copy and paste as a new layer. Move to the bottom of templates layer. Move so that it is below the flowers layer.

Open the jailhouse rock buckle with the handcuffs. Resize it then copy and paste as a new layer to the top of the tag. Move it below the tube layer though so it’s not covering her.

Save and your done! Thanks for trying my tutorial.
Posted by Shani - Wicked Princess at 4:51 PM