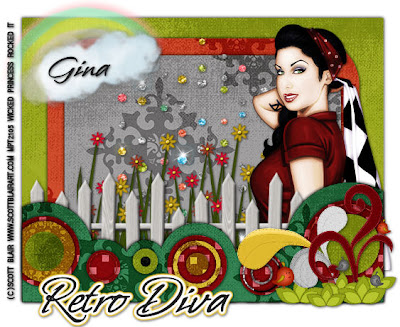 
This tutorial was written on July 14, 2009 by Shani aka Wicked Princess. The concept of the tag is mine and mine alone. Any resemblance to any other tag/tut is pure coincidence. This was written for those with working knowledge of PSP.
Supplies Needed:

++Template 61 by Missy can be found HERE

++Tube of choice or the one I used. I used the work of Scott Blair which can be purchased from HERE

Open the gem rain element and resize copy and paste as a new layer. Center it so that the top of it is on the first rounded rectangle layer. Move this layer to just above the second round rectangle layer.

Next open the tall flowers with grass. Center them in the second rounded rectangle. Move this layer just above the gem rain layer.

Open your tube of choice, add your plug in Xero, radiance to the random setting of your choice. Copy and paste as a new layer and move it to above the flower and grass layer.

Then open the fence layer and resize. Copy and paste as a new layer and move above the tube layer. Center and adjust as needed.

Add the doodle that has the grass and flowers next. Resize and copy and paste as a new layer in the bottom right corner of the tag. Make sure this layer is on the top layer.

Open the cloud and rainbow. Resize then copy and paste as a new layer moving to the upper left hand corner of the tag. Angle it to the left slightly and make the rainbow look loke its coming out of the cloud.

Save and your done!
Thanks for trying my tutorial
Posted by Shani - Wicked Princess at 6:14 PM