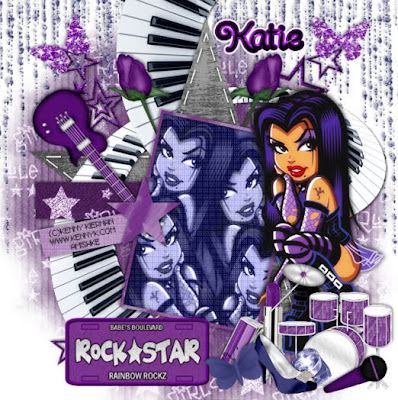 **SCROLL DOWN AT THE BOTTOM FOR SECOND EXAMPLE**

This tutorial was written on April 15, 2010 Shani aka Wicked Princess. The concept of the tag is mine and mine alone. Any resemblance to any other tag/tut is pure coincidence. This was written for those with working knowledge of PSP.

++Tube of choice or the one I used. In the main example I used the artwork of Kenny Kiernan, which is a PTU artist. Check artists Web Site to find out where to purchase. and in the second example I used the tubes provided made by DNscraps


**NOTES:
-Add Drop shadow of choice as you go
-You can merger layers as you want to make things easier for yourself.

Open the glitter rain. Resize then copy and paste as a new layer. Move to the top of the canvas, just above the mask layer.

Then open the star glitter trails. Resize then copy and paste as a new layer. Move at an angle to the right side then duplicate and go to image, mirror.

Next open the spiral piano keys. Resize then copy and paste as a new layer into the center of the canvas. Move it do below the star template layer. Duplicate it and move this layer above it. On the bottom layer, erase the parts you don’t want shown over the star. Note I did the top part of the star

Now open the glitter butterfly train, resize then copy and paste as a new layer. Move to either side of the star. Adjust as you like. Copy and paste the rose you like next to them also.

Open your tube of choice, resize then copy and paste as a new layer. Move it into the frame so that it is to the left some. Duplicate it then go to adjust, blur, guassian blur. Change the blend mode to overlay. Merge down one layer. Duplicate it and go to image mirror, then move it below or above the original as you like.Again, just to the side. Duplicate it and go to image, mirror. Add your drop shadows and merge down one layer. Add your plug in, penta dot and cross on the setting you like. Change the blend mode to Lumincance. Using your magic wand tool, click inside the frame layer and go to selections, modify, expand by 3. On the merged tubes layer, hit the delete key. Go to selections, none.

Open the tube again, resize then copy and paste as a new layer to the right of the frame, adjusting as needed.

Then open the lipstick, drum set, makeup container, shoe , microphone and butterfly you like. Copy and paste as you like in a cluster to the bottom right of the tag.

Now open the guitar, and turn it up at an angle, resize it then copy and paste as a new layer. Move it to the left of the tag, below the small start layer.

Add the license plate, to the bottom left of the canvas. Add your text, copyrights, license info and tagger markings. Save and your done. Thanks for trying my tutorials. 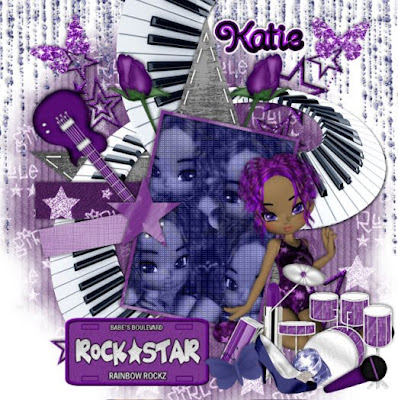