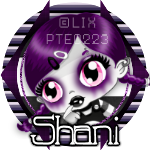 This tutorial was written on December 22, 2011, Shani aka Wicked Princess. The concept of the tag is mine and mine alone. Any resemblance to any other tag/tut is pure coincidence. This was written for those with working knowledge of Paint Shop Pro.
Supplies Needed:


++ Tubes of choice or the ones I used, which is by Lix and called “Mew” and “mirta” andyou can find them at PSP Tubes Emporium HERE and Here You must have a valid license to use these tubes. Please be mindful of copyrights!

++Scrap kit of choice, I used a FTU one called “Death Becomes Her” by me, Wicked Princess Scraps and can be found on my scraps blog HERE


++Template Twisted T, which can be found on the Pimpin’ PSPers blog HERE

++Fonts of your choice. I used Americana

**NOTE ADD DROP SHADOWS OF YOUR CHOOSING AS YOU LIKE! AND SAVE AS YOU GO!

First open the banner template for the forum set.

On the bottom circle frame layer, add a glitter…go to adjust, add/remove noise and set it to what you want. I did a random one.

Then open up one of your tubes. For example I used the Mirta tube. Using the close up (if you have one) copy and paste as a new layer. Move it to just above the arrow layers. Adjust it where you like it. Duplicate it and go to image, mirror. Adjust if you need to. Go back to the first one. With it activated go to effects, textures, blinds. I used the default setting it was already set to. Click ok. Do it again, but either check or uncheck horizontal (which ever is the opposite of what you had) and click ok. Do this for the opposite one too.
Back to activating the first close up layer (for me this was the left. I work from left to right lol) and go to the arrow right below it. Go to selections, float, selections defloat then edit clear. Now selections none. You should have the close up in the shape of the arrow. Do the same for the opposite arrow. Change the blend mode to luminance legacy.

Now we’re going to add the flames! Open up your flames elements from the kit. Copy and paste it as a new layer above the arrow layers. Adjust it and resize as you like it. Add a soft gradient glow, I chose white. Now activiate the bottom circle layers frame. Using your magic wand tool, click inside the frame. Go to selections, invert. Click on the frames layer and then go to edit, clear. Now selections, none. The flames should look like they’re coming up out of the frame layer and onto the arrows.

With this layer still activated, change the blend mode to luminance legacy. It should take on the appearance of the arrow layers some. Look at mine to make sure that’s what it looks like. Make adjustments as you like!
Now open up the main tube you are using, in my case, Mew. I used the close up once again. Copy and paste as a new layer. Move it below the top circle frame layer. Adjust it where you want it to be. We’re going to make her look like she’s popping out of the frame. Duplicate it and move it above the circle frame layer. On the frame layer use your magic wand tool and click inside the frame. Go to selections, modify, expand by two. Now click on the bottom tube layer (in the layers palette) and go to selections invert, then edit, clear. On your top tube layer, erase the parts you don’t want seen outside the frame layer. For example, I removed her lower half.

Next add the teddy bear to either side of the tube, to where it’s facing in. Add the skulls to the top of the arrows at an angle.

Don’t forget your copyright information. You can notice that I used a pixel font on mine and the color white. What I did was add it to the top of the tube layer and lowered the opacity so it didn’t take away from the set but it could be seen as well.

Add any text you want, save as a png and you’re done!

Thank you for trying my tutorial!